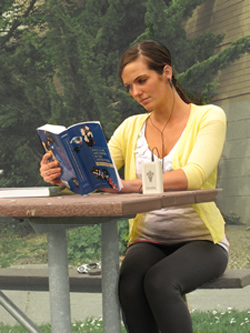 I began having sleep problems when I started my new job as a teacher and my husband started shift work. I found it hard to fall asleep and I was waking up much too early and then I was unable to get back to sleep again.

Sleeping pills are not an option for me because sometimes they leave you tired and I have to be alert at my job during the day. After using the [CES Ultra] for less than 30 days, I have found I am able to fall asleep more quickly and stay asleep until my alarm clock actually goes off. When I get up I feel well rested and able to take on my day.
~ Jennifer B.

Click a question to contract or expand (toggle) the answer.

Contract All | Expand All

Why have I not heard more about CES?

Cranial Electrotherapy Stimulation (CES) has been a relatively unknown and underused technology due to the fundamental Western bias in favor of pharmaceuticals. Within the last twenty years, we have come to better understand the connection between brain function, neurotransmitters, and electrical stimulation. As our knowledge of this area continues to expand and new research findings emerge, so too will the popularity and increased usage of CES. Learn more at What Is CES.

CES has an excellent safety record. Published literature in the U.S. and abroad, reports virtually no negative side effects or major contraindications from its use. The National Research Council (NRC) has deemed CES to be a non-significant risk modality.

Because the only source of current for CES Ultra is a common nine-volt battery, its intensity is limited to 1.5 milliamps - what you would use to operate a small toy or penlight. Even the unit's maximum intensity has been shown to be safe. See Is CES Ultra Safe.

How does CES work?

Researchers believe that CES works by indirectly stimulating tissue in the brain's hypothalamic area. This causes the brain to manufacture various neurohormones, restoring its state to pre-stress homeostasis. The exact physiological mechanism is still being researched. Inquire how CES works at CES Non-Pharmacological Gentle Treatment.

How is CES Ultra's current transmitted?

The CES Ultra device transmits current two ways. You can either place pre-gelled electrodes below each ear (after plugging the electrodes' wires into the unit's jack), or you can attach ear-clips, fitted with conductive rubber electrodes, to your earlobes. Read more or watch an informational video at CES Ultra Technical Specifications.

How is the CES Ultra different from other CES units?

The CES Ultra device is the premier unit on the market. It alone features the original 100 Hz configuration that most of the CES research has been done on. Other units may claim to carry the 100 Hz but no other unit has an accurate rendition of the configuration on which most of the research is based.

You may also find certain underground instruments on the market, particularly on the Internet. Contrary to their anecdotal claims, most have no scientific evidence behind them. Many are nothing more than low-cost pulse generators of dubious quality, and have not been fully evaluated for either efficacy or safety. They are not registered with the U.S. Food and Drug Administration (FDA). Many are billed as for research purposes only; they cannot legally be called medical devices or make any medical claims.

What is the experience like to use the CES Ultra?

Most people find CES a pleasurable experience. The most you will ever feel is a gentle tingling sensation that you can control with a simple turn of the knob. Increasing or decreasing the amplitude does not affect how efficient the treatment is for you. Research shows that CES operates effectively at both lower and higher levels of stimulation, even at a level so low that you cannot feel a thing.

A common approach is to turn the amplitude to the point of sensation, turn it down slightly below that point, and leave it there for the remainder of the session. Your own comfort level always dictates the amplitude. Visit Benefits of CES Ultra.

Yes. The CES Ultra is very easy to use. All you need to do is:

Consult How to Use the CES Ultra Device.

What immediate results can I expect from CES Ultra?

Most people experience results almost immediately after treatment. Others notice a response after several days. This relaxed-but-alert state usually remains for an average of 12 to 72 hours after the first few sessions. With regular use, it is possible for the patient to habituate to this preferred state of consciousness. Visit The CES Ultra Experience | Initial Usage.

How does CES affect sleep?

CES has been approved for the treatment of insomnia. Within the first five to nine days, you should notice that your sleep patterns begin to normalize, with fewer and shorter periods of awakening during the night. You will enjoy going to sleep more quickly after you retire for the night and a greater feeling of being rested when you awake in the morning. CES users often report an increase in vivid dreaming, resulting from compensation for lost rapid eye movement (REM) sleep. As sleep patterns normalize — within the next two or three nights — this should become less frequent. Please note: Individual results may vary. Explore CES Applications: Insomnia for more information about sleeping better.

What additional long-range changes should I expect from CES?

CES Ultra users report that mood swings become less frequent, as do irrational anger, irritability, and poor impulse control. You will find mental confusion due to stress begin to subside. Your ability to focus and concentrate on work will become easier and more efficient, with visibly enhanced cognitive processing. As your concentration and memory improve, recalling information and learning in an accelerated manner should return to normal pre-stress levels. Please note: Individual results may vary. Visit The CES Ultra Experience | Weeks 2 and 3.

When should the CES Ultra be used?

You can use the CES Ultra when you awaken in the morning, during the day and prior to going to bed at night in particular situations. You can use it both as an adjunct to meditation each morning or during stressor moments that occur unexpectedly in the course of a day - those times when you lose it.

Using the CES unit in those situations - even for as little as ten minutes - can help curb anxiety. In addition to activating actual bio-electrical changes, it can serve as a reminder that you can be with yourself in a different way - a positive affirmation that you have the power to change your emotional state and are willing to create the time and the space to do so. Ultimately, each person finds for him/herself how best to incorporate CES into one's daily routine. Refer to When to use the CES Ultra.

How often should CES be used?

Use it until the symptoms disappear. Many symptoms will begin to fade after 10 minutes to three days of treatment 1 hr/day. Most will be alleviated by the tenth to fifteenth day of daily treatment, 1 hr/day.

Some addiction treatment clinics use it on patients 24 hours/day, and some patients want to self-treat for many hours at a stretch. Use CES as much or as frequently as you like. CES is not addictive, and when the symptoms subside, patients often stop using CES on their own volition. Consult How often to use the CES Ultra.

Where can CES Ultra be used?

The CES Ultra is about the size of a cell phone. Clients report using it just about anywhere and under a variety of circumstances. You can use it at home while watching TV, doing the dishes, or at the office while poring over a report.

CES should be treated as more than an aside - as one more task, squeezed in between others. It is an important reminder of the need for inner quiet. Though you need not interrupt your usual activity for CES, its results are generally enhanced by setting aside a special time for its use alone. See Where to use the CES Ultra.

What is the suggested length and frequency of CES treatment?

During the first month, the recommended usage is 45 minutes once or twice daily. Once symptoms are reduced or eliminated entirely, the frequency of treatment may be reduced to two or three times weekly. Individuals undergoing psychiatric treatment or suffering from severe anxiety and extremes of compulsive behavior often benefit from more frequent and prolonged application.

When symptoms of anxiety or insomnia have lessened or disappeared, it is important to have continuous access to the CES unit as a tool for relapse prevention on an as-needed basis. It is helpful that you work closely with your physician/licensed healthcare provider to determine the role CES plays in your overall treatment program. Find more information at Suggested length of CES treatment.

Are there any CES contraindications or side effects?

Thousands of CES units have been and are used in hospitals and clinics, and tens of thousands have been in use by patients in their homes for more than 38 years. No major side effect has been noted or called in to physicians or the FDA from units similar to the CES Ultra device. There are no known contraindications for use of CES.

There are, however, circumstances in which its safety has not been tested. CES should not be used without on-going clinical supervision by epileptics, those known to be pregnant, or by individuals with implanted electronic devices such as cardiac pacemakers, electronic brain implants or insulin pumps.

The induced relaxation response resulting from use of CES does not in any way impair reaction time. It is recommended, however, that CES not be used while operating dangerous or complex equipment or while driving. Less than three percent of CES users report a slight headache. This is usually alleviated by simply turning down the current. If the headache recurs during ordinary use, cease using the unit and consult with your healthcare provider.

In 1976 the U.S. National Research Council studied CES at FDA's request. They determined that no significant risk could be involved in putting such small amounts of current through the head, even over time.

As with the use of any medical device, the physician/licensed practitioner should be informed of any medication or neurotransmitter blockers the patient is taking as well as the employment of cardiac pacemakers or other electronic devices as mentioned above. CES is not a substitute for professional counseling, meditation, or constructive relationships. Used in conjunction with those efforts, CES assists you in attaining a balanced emotional state. See CES Contraindications Or Side Effects.

What research is there as to the effectiveness of CES?

Many of the approximately 1,000 articles on CES therapy are listed in four reviews put out by the Foreign Service Bulletin of the United States Library of Congress. This is in addition to the wealth of physiological and bio-engineering data on electro-sleep and electro-anesthesia, including 18 experimental animal studies. Human research studies on CES currently number more than 100. Its efficacy has been clinically confirmed through 28 established psychometric tests, computerized electroencephalograms (EEGs) and topographical brain-mapping. Meta-analyses yielding positive results from the use of CES have been conducted at the University of Tulsa and the Harvard University School of Public Health. No significant negative side effect has ever been seen during a study or follow-ups of up to two years later. Find research resources at The Science Behind CES.

What is the current legal status of CES?

Outside of the United States, CES is an over-the-counter device, available without a prescription and with few restrictions. In the U. S., it may be secured only on the order of a licensed health care practitioner (M.D., N.D., D.O., PhD. Psychologist, or Chiropractor, depending on a given state's regulations). Visit CES For Professionals for a complete list of applications and associated, licensed medical professionals.

Get Your Own CES Ultra Device For Home Use