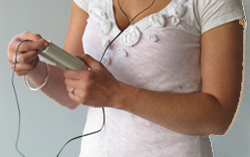 Read for yourself about the astounding relief and results that people have experienced using CES and the CES Ultra. Contact us today to learn how you can experience similar results in the privacy of your own home.

The patient is a twenty-one-year-old female college student whose learning disability took the form of hyperactivity turned inward where it emerged as a self punitive hyper-irritability.

Throughout childhood she was often sick, was known for carrying tissues at all times, could not digest her food if she ate just prior to going to school, and could not digest "junk food" snacks eaten during the school day. Anything sweet was a special digestion problem.

Various treatments were tried with this patient, including visits to other physicians, chiropractors, educational kinesiologists, and holistic therapists. She was given enzymes, thyroid tests, massage for "tight intestines," brain entrainment audio tapes, vitamin B shots, and work with an "alpha pacer." The vitamin B helped her energy level when it sagged, the entrainment tapes and "alpha pacer" helped temporarily. Light and sound stimulators were not effective.

She observed early on with the CES and that when the device was in use "it numbed my anger" so on one occasion when she desired to feel anger, act it out, and cry as in the past she refused to wear the CES device until she had finished "having my fit."

CES intervention was also associated with the cessation of a difficult premenstrual tension syndrome. She reports no further menstrual cramps since using the device and states "I am not witchy anymore" during her menstrual periods. She states that she is no longer bothered by the chronic fatigue that so dramatically affected her earlier learning efforts. Her educational therapist reports she is now functioning normally for an adult college student with superior intelligence.

Contact us to discover how the CES Ultra can help you get restful sleep, enjoy peace of mind, and experience greater relaxation.