Ok, maybe your grandparents probably slept like you. And your great, great-grandparents. But once you go back before the 1800s, sleep starts to look a lot different. Your ancestors slept in a way that modern sleepers would find bizarre – they slept twice. And so can you.

The existence of our sleeping twice per night was first uncovered by Roger Ekirch, professor of History at Virginia Tech. He

published a seminal paper, drawn from 16 years of research, revealing a wealth of historical evidence that humans used to sleep in two distinct chunks. 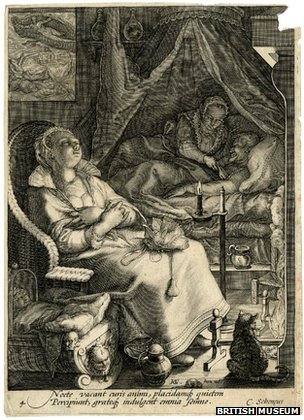 His book At Day’s Close: Night in Times Past, published four years later, unearths more than 500 references to a segmented sleeping pattern – in diaries, court records, medical books and literature, from Homer’s Odyssey to an anthropological account of modern tribes in Nigeria.

Much like the experience of Wehr’s subjects, these references describe a first sleep which began about two hours after dusk, followed by waking period of one or two hours and then a second sleep.

“It’s not just the number of references – it is the way they refer to it, as if it was common knowledge,” Ekirch says.

During this waking period people were quite active. They often got up, went to the toilet or smoked tobacco and some even visited neighbours. Most people stayed in bed, read, wrote and often prayed. Countless prayer manuals from the late 15th Century offered special prayers for the hours in between sleeps.

And these hours weren’t entirely solitary – people often chatted to bed-fellows or had sex.

Should We Revive Two Sleeps?

Although history shows that two sleeping was common, and science indicates that it is (in some conditions) natural, there is no indication that it is better. Two sleeps may leave you feeling more rested, but this could simply be because you are intentionally giving yourself more time to rest, relax, and sleep. Giving the same respect to the single, eight-hour sleep should be just as effective.

Note too that two sleeping needs a lot of darkness – darkness that is only possible naturally during the winter months. The greater levels of daylight during summer and other seasons would make two sleeping difficult, or even impossible.

Perhaps two sleeping is merely a coping mechanism to get through the long, cold, boring nights of the winter. Today, we don’t need to cope. So long as we give our sleep the time and respect it needs, getting the “standard” eight hours of sleep should be fine.

Or use CES Ultra, Cranial Electrotherapy Stimulation – it will help to sleep, no medicine needed….