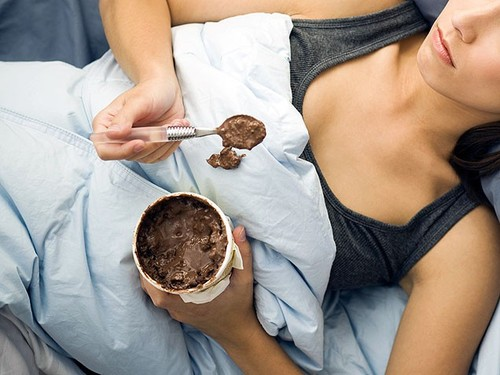 Is the trick to cutting cravings for sugary foods as simple as getting a good night’s sleep? A new small study from the United Kingdom suggests that may be the case.

Earlier research has shown that more than one-third of U.S. adults get 6 hours or less of sleep each night — less than the recommended 7 to 9 hours, according to the study. With that in mind, the researchers chose to examine whether a sleep consultation could help adults get more shut-eye and how doing so might affect their daily nutrient intake.

Spending an extra 90 minutes in bed may not seem like the obvious way to lose weight, but according to a new study, it could be the key to shedding excess pounds.

Scientists from King’s College London have discovered that people who sleep for longer are less likely to pick sugary treats, or reach for comforting carbohydrates.

Lack of sleep was already known to be a risk factor for obesity because it alters levels of hormones which control appetite.

But a new study showed that by getting more sleep, people naturally choose healthier foods within a week, eating on average 10 grams less sugar each day.

In the study, the researchers recruited 21 individuals to participate in a 45-minute sleep consultation designed to extend their sleep time by up to 1.5 hours per night. Another group of 21 participants were also recruited but did not receive intervention in their sleep patterns, therefore serving as the control group, according to the study.

The results showed that the participants who increased the amount of sleep they got each night reduced their added sugar intake by as much as 10 grams the next day compared with the amount of sugar they consumed at the beginning of the study. These participants also had a lower daily carbohydrate intake than the group that did not extend their sleep patterns, the study found.

Getting a good night’s sleep:

Go to bed at roughly the same time every day, even at weekends. Lie-ins make it harder to get to sleep the next night, setting you up for a troubled week.

Avoid screens late at night, especially laptops and tablets. The bright, close light tricks your brain into thinking it is earlier in the day.

Begin winding down for at least an hour before getting into bed, allowing your brain to slow down. Intense activity, be it work or exercise, will keep you awake even if it tires you out.

Keep drinking water. Dehydration is the primary cause of ‘shallow’ sleep, so while you don’t want to wake up needing the loo, take on enough fluids to stop yourself waking up thirsty.

Never go to bed hungry, but eat the right foods before bed. Turkey, warm milk, honey, camomile and Marmite are all recommended.

Use Cranial Electrotherapy to sleep better

Cranial electrotherapy stimulation (CES) uses a gentle electrical impulse applied to the ear lobes that is anatomically transferred to the brain. By allowing the brain to “reset” to its normal rhythms, CES creates a new and healthy habit for your sleep patterns. CES unit is handheld, and is designed to be used at home. Studies show that within two weeks of daily CES use you will see a substantial decline in your sleep problems.