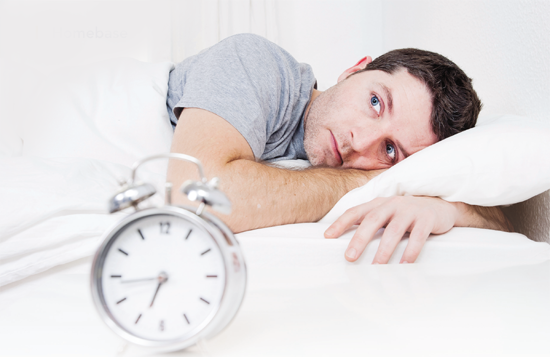 Military personnel experiencing post-traumatic stress disorder (PTSD) symptoms from trauma faced in the line of duty often go many years without seeking treatment. Sgt. Dwayne Sawyer suffered from PTSD symptoms for five years before he sought help, while Leading Aircraftsman J. Smith (name changed to protect identity) suffered from the late 1950s until four years ago. Even with medical assistance, some may not experience relief from their symptoms, while others won’t seek help because of the stigma attached to the
diagnosis of PTSD.

“The Sleep Genie” is the name of the CES Ultra in Canada.

Several doctors in Canada are using CES as part of their therapy. In Barrie, Ontario Dr. Jonathan Douglas, (Ph.D., C.Psych) became aware of the technology in 1998. He looked into it for a number of years, analyzing the research before trying it as a part of his practice. He began using the Alpha- Stim in his office and then purchased several Sleep Genie units to lend out to his clients for home use. Dr. Douglas explains the deciding factors for using this technology: “I use it based on the presentation of the client – do they have difficulty falling asleep? Are they anxious or depressed? Do they have chronic pain? These symptoms respond well to the Sleep Genie. It is a non-addictive alternative to medication; a gentler solution.”

Sgt. Sawyer was experiencing sleeplessness due to flashbacks and nightmares; PTSD symptoms that resulted in sleep avoidance. “I didn’t want to fall asleep because I didn’t want to relive the trauma, explained Sawyer.” As a result, he was exhausted all the time and spending $75-100 per day on high dosage sleep medication. He wanted off the medication. 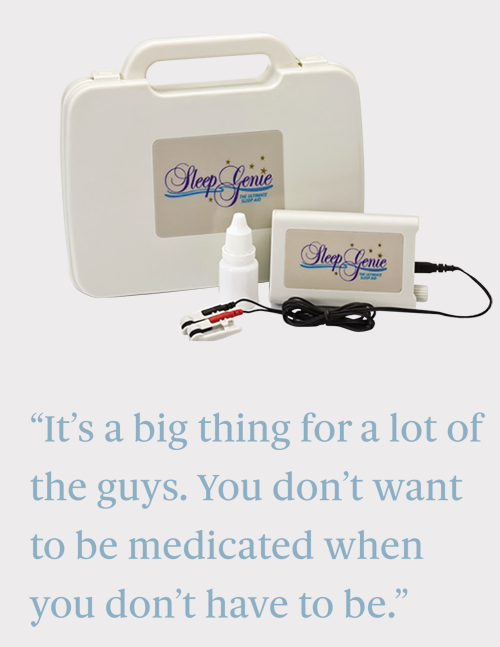 “It’s a big thing for a lot of the guys. You don’t want to be medicated when you don’t have to be.” When his therapist recommended CES therapy, Sawyer was skeptical at first, thinking “there is no way this will work.” He noticed results after just a week, and after six weeks he was getting a full night’s sleep and had more energy during the day. He uses the CES device for 20 minutes per week while he watches television. He still gets flashbacks and nightmares, but nothing to what it was before. “Life is slowly coming back to normal again. I can keep my symptoms under control now. It saved my wife and kids.”

Leading Aircraftsman Smith wasn’t skeptical about the CES device when his therapist recommended it. He was fed up with his symptoms. He explains, “I’ll try anything to help.” After three years of using the technology regularly, he still experiences his PTSD symptoms on and off, but they are not as severe as they were before.

Dr. Ken Welburn, Ph.D., C Psych, the clinical director of a trauma clinic in Ottawa, has been educating therapists for 20 years about the psychiatric symptoms of trauma. He explains that cranial electrotherapy stimulation is a widely researched area. “Since the technology was invented in the 1950s in Russia for sleep problems, many scientific studies have been done and are very conclusive that it is an effective treatment of insomnia, anxiety, depression, and certain types of pain.” He was impressed with the research on CES devices, especially that there are no serious side effects, so he purchased a unit and tried it on himself. He experienced better quality sleep and felt a calm focus during the day.

Dr. Welburn started a study with his clients, using the variables: sleep latency, numbers of hours spent asleep, disturbance in sleep, and sleep deprivation during the day. He evaluates his clients based on this criteria before they use the CES device and interviews them every week for the eight weeks using the device. “There is a pronounced effect, a dramatic change in these variables.” He explains that, to PTSD sufferers, “sleep is a dangerous place so you try to avoid it.” He finds that continued use of the CES unit helps his clients to “better handle stress without overacting to change emotionally.” Dr. Welburn notices the biggest changes in sleep quality, anxiety levels, and the improved ability to focus. “It is a great tool for treating trauma and for helping manage the symptoms my clients are experiencing. It is not the whole therapy but part of it.”

Both doctors believe that the use of medications for sleep, anxiety, and antidepressants can be drastically reduced with continued sessions. But they also say its important to keep in mind that changes occur over time and with continued use. As Dr. Douglas explains, “there is never going to be a cookie cutter approach for any situation.” Some people will not find relief in the technology. Dr. Welburn finds that approximately 85% of people respond positively to the treatment, while Dr. Douglas found that since his introduction of the CES device in 2006, only three patients have had a negative reaction.

The Sleep Genie, can be purchased directly from the company but it is recommended people use it in conjunction with therapy. It is not recommended that you use the device if you are pregnant or if you have a pacemaker. Dr. Welburn explains, “there have never been any adverse side effects in these cases; it is just a precaution.”